Trip of a Lifetime

So, back in 2013, my good friend Sarah told me about a trip she was planning to the Amazon Rainforest. We were chatting about it, and I was really interested in what she was describing. “Why don’t you come?” she asked. I was working full time on a gap year from uni, I had saved up a decent amount and wasn’t really planning to do much with those savings beside…save. I’ve never travelled without my family at this point, and travelling to a country on the other side of the world where I didn’t speak the language seemed terrifying..but also exciting. Even with Sarah being with me,  I had lots of doubts and fears. It took me a few weeks to come to a decision, yes I’ll come with.

The trip then became a month long excursion around Peru. We hit seven different cities, we spent a week in the Amazon Rainforest, we hiked to Machu Picchu, and spent a month travelling between hostels, meeting others from around the globe who were also travelling through Peru. It was the most daring thing I’ve ever done. I’m glad I conquered my fears of travelling to a unknown and far-off place. Of spending a month travelling between cities, staying in hostels and taking part in a new adventure with Sarah.

The cities we spent time in were Lima, Arequipa, Cuzco, Puno, Ica (and Huacachina), Paracas and Iquitos. We spent five days doing the Salkantay Trek up to Machu Picchu. We spent a week in a lodge in the Amazon Rainforest. Peru is an amazingly diverse country, we went from being up mountains, to being in a desert, to being in a jungle. Both Sarah and I researched extensively to make the most out of this trip. We wanted to do as much as we could, to see and experience what Peru had to offer. 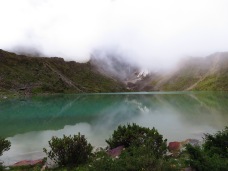 I kept a detailed travel journal while over there, which I have recently found. I also made a scrapbook soon after getting back. I also have literally thousands of pictures that Sarah and I took saved on my hard drive. I’m going to delve into these and relive the adventures, and share them with you! I’ll review the hostels we stayed at too, so anyone planning to backpack through Peru can see where we stayed. It’s a fun distraction to keep me from getting too stressed as the wedding comes closer. I’m excited, but damn there’s a lot to do. I’ll do my best to stay active on the blog on my down time. I hope you’ll enjoy relieving my Peru adventures with me over the next two weeks!

Angela Hi! I'm Angela. I'm 28, based down in New Zealand, and happily married to a wonderful guy. We have a beautiful little one year old girl whom I often talk about. Welcome to my blog where I blog a little about anything and everything.
Published March 20, 2017March 20, 2017

8 thoughts on “Trip of a Lifetime”