The Inca trail is the best known track to hike up to Machu Picchu. It’s extremely popular, and books out very fast. For our trek up, we decided to choose the road less travelled. We went with the Salkantay Route. We booked a five day tour with Salkantay Trekking, as they came highly recommended. It was certainly one of hardest and most rewarding treks I’ve ever done.

Day 1 started with us getting picked up in the van at 5.30am. We met the rest of our group. Ash, Ally, Rebecca, Andrew and Charlie were from Australia. Brent, Holly and Julie were from USA. Then Sarah and me from New Zealand. Our guide was Hector, it was a good group. We drove for a few hours, stopping off in Mollepata (2900m above sea level) for a rest stop and optional breakfast. Then we kept driving up to Challabamba (3550m) where we started our trek. By now it was 9.30, and we were all ready to start. We only needed our day packs from here, as the staff had mules to assist us in carrying the larger packs and tents. It was a slow slope up, and we all enjoyed the view of the valleys and streams. This part of the hike took around three hours, and it was nice. We walked and talked and got to know each other. We also made sure that everyone had altitude sickness pills with them, as after going through that in Arequipa, I didn’t want to go through it again. Not fun. A few hours later, we arrived at Soraypampa (3850m), had lunch and rested. 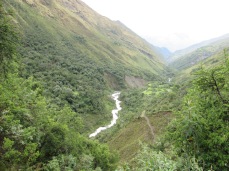 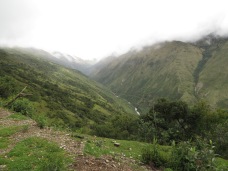 We were given the option to walk up to Lake Humantay (4270m) after lunch. A round trip takes just under 3 hours. It was a very steep uphill climb. We all had to stop a couple of times to catch our breath. My legs were starting to ache after already walking a few hours this morning. But we all made it, and the lake was beautiful. The clouds were starting to come in, but that made everything look more mystical.

The picture below is also being featured on @traveller_dave‘s instagram, as part of their travel photos subject which is pretty cool!

It rained quite hard that night, but lying down inside the tent, it was quite comforting and I slept very well. We walked for just under 6 hours, and covered a distance of 12km.

Day 2 is said to be the hardest day. It’s also the day where you hit the highest peak. Salkantay Pass, at an impressive 4630m above sea level. We had an early start and started heading up. It took around three hours to climb from the rocky valley to get to the peak. It wasn’t too bad at first, like the first day, it was just a gentle slope. Then it kept getting steeper, and it looked like it would never end. This part was excruciating for me. Sarah and I stopped many many times, as did many in our group. My legs were not happy with me, and I was leaning all my weight into the walking poles, willing myself to just keep going and dragging my body up the terrain. I focused on my breathing and focused every part of my mind and soul on just continuing up. Eventually, we reached the top, and I don’t think I’ve ever felt that much relief in my life.

In fact this photo of me made it as the #Daily Happy Traveller on March 25 over on We’re the Traveller’s blog! 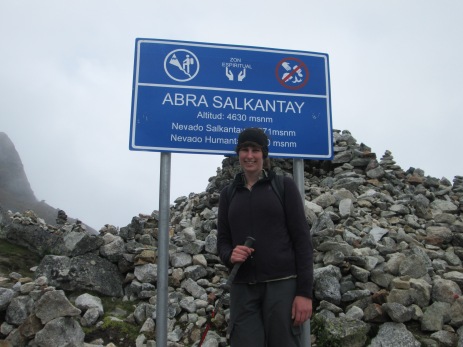 The walk down the mountain wasn’t bad, but it started raining for real. So now we were wet and tired. 2 hours of walking later, we reached our lunch spot, rested, then continued on our walk. This time we were walking through the top part of the Amazon Forest, where the weather became so hot that we had to lose all the layers we’d put on during the ascent. This part of the hike took around 3 hours, and we were just surrounded by lush greenery. The rain had also made parts of the walk incredibly muddy though, I sank all the way to my knee in one part when I wasn’t paying attention where I was going. Sarah and Hector had to grab my arms and help yank me out. Good times. 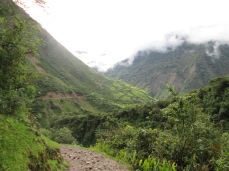 We reached our campsite in the evening at Chaullay (2850m), there was a shower there which I was grateful for. We had a nice dinner, chatted lots about the day’s hike, and relaxed. We walked for around 8 hours, and covered a distance of 22km.

Day 3 was a shorter walk. I was feeling the effects of the previous day’s walk so I’m glad the walk was basically on flat ground. We hiked through the jungle for around five hours. Since this was an easier walk than yesterday, we were all able to walk and talk and take our time. I did start to develop a bit of a cough however, I figured it was after effects of putting my body through that workout the day before. 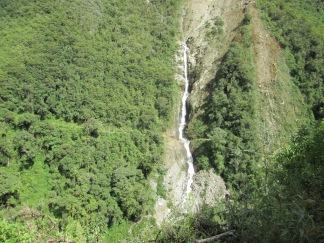 We ended up in Santa Teresa (1650m), and went to the Hot Springs. My legs felt much better after that. My whole body was more relaxed than it had been in days. I felt refreshed and ready to take on the last day of hiking before reaching our destination!

Photo credit to Guide Trip. I forgot to take my own photos there, cause I was too busy relaxing!

We walked for five hours, convering a distance of 15 km.

Day Four had the least amount of hiking. It was all pretty much flat terrain again. I was very thankful for this, as my cough wasn’t getting any better. My legs were no longer sore thanks to the hot springs though. We walked along tracks for the whole way to Aguas Calientes pretty much. 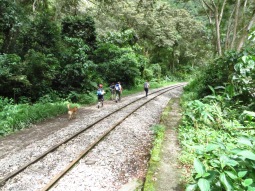 Then once we were we reached Aguas Calientes that afternoon, we were off to our respective hostels. We met up for dinner that night, and confirmed the plans to meet up the next morning to catch the bus up to Machu Picchu. We walked 15km this day again.

Day 5 started off with a bit of a hitch. A giant boulder blocked the path, so buses weren’t able to take us to the entrance. So instead, we had to take the stairs. It took us an extra hour than originally planned, but we finally got to Machu Picchu! We took one final group photo and had a short tour with Hector. Then we said bye and split off in groups to explore it on our own. I’m going to devote tomorrow’s post to just our time in Machu Picchu. It deserves a post all on it’s own.

Angela Hi! I'm Angela. I'm 28, based down in New Zealand, and happily married to a wonderful guy. We have a beautiful little one year old girl whom I often talk about. Welcome to my blog where I blog a little about anything and everything.
Published March 25, 2017March 27, 2017