Previously, A is for Avatar: The Last Airbender. I hope you guys enjoyed the last post. I had a lot of fun writing about it 😀

Now we have a look at B.

I have a soft spot for comedies. They are fun and easy to watch, which makes them perfect for binging. Brooklyn Nine-Nine is a ‘smart’ comedy, which to me means that they have clever, layered jokes. They may have some weaker episodes, but overall the quality is high. When they write a good episode, it’s amazing. Another high recommendation from Angela.

So, let’s talk about the basic premise of the show. It’s a workplace comedy. Set in the 99th police precinct in Brooklyn, New York. It follows Jake Peralta, a gifted but immature detective as they bring in a new captain, Raymond Holt, a seasoned, very serious gentleman who clashes with Jake. That’s the pilot episode anyway. As the first season goes on, they quickly flesh out the show and the characters.

Like good comedies, they get silly, but know how to touch on serious subjects as well. My favourite parts of the show are often the cold open. Before they show the opening credits, they open on a random, often unrelated scene that is just comedy gold. Another good quality of the show is that they are also quotable. 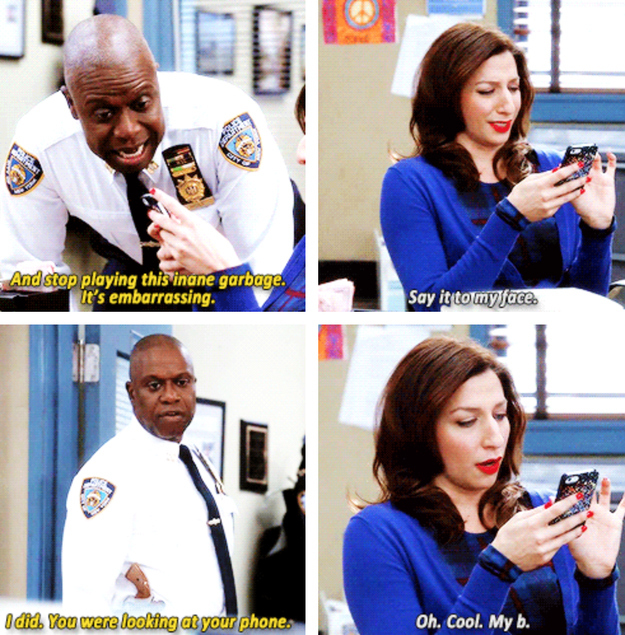 The characters all have good relationships with each other that the show builds on and explores. Since it’s a show with a larger cast, there’s so much dynamics that they’re able to play on. There’s romantic pairings of course, but they focus more on frienship dynamics, both personal and work-related.

Now, as usual I will talk more about the characters.

A talented detective, he starts off as more arrogant than lovable to me, but slowly loses the arrogance and just becomes more of a doofus. A lovable and talented doofus with a big heart. He commits fully to his work, and knows that he’s good at what he does. He is a child at heart, and will often play up at work, which lands him in trouble every now and then. He is played by Andy Samberg, who I have a soft spot already due to The Lonely Island.

Another talented detective. Her and Jake often compete on who is the better detective. She is very organized, loves making lists, sorting things into neat piles, has a set routine… She is also extremely competitive, often to a ridiculous point, and she’ll never give up or back down. She is very ambitious and wants to be Captain one day, leading her to idolize Captain Holt which gives us some hilarious and awkward moments. She’s played by the delightful Melissa Fumero.

Best friend of Jake. Foodie. Divorced. Wears his emotions right on his sleeve. I didn’t like Boyle at first, his character felt grating. But by early on in the first season, his character became more fleshed out and was much more likeable. He is often prone to jump on board with whatever Jake suggests, as well as just jump right off the wagon with his strange thoughts and ideas. These can range from risky food choices, to just oversharing about his private life to anyone. He is also a great detective, and often points this out when people try to overlook him. He’s played by Joe Lo Truglio.

Scary. Tough. Doesn’t like talking about feelings. Handy with sharp objects. Rosa is another skilled detective in the ranks. She is very loyal, and often short tempered. She usually keeps her cool, but you wouldn’t want to be around her when she gets pissed off. I love the conversations between her and the Captain, as their ’emotionless’ talks can be very entertaining. She’s played by Stephanie Beatriz.

The Mother Hen of the group. He tries to keep everyone (mostly Jake) in check. He is also a loving husband and father to twin girls, and another little one on the way. He loves working out, and yogurt. He also often refers to himself in third person when he’s talking. He’s played by Terry Crews. They also often take advantage of his strength and muscles in the show, and he’s lifted or carried off most, if not all, of the other cast at one point or another.

The only civilian in this workplace. She’s the admin assistant. But she doesn’t really like paperwork, or work in general. She is very talented at knowing all the ins and outs of what’s going on. She prides herself on this, as well as her looks, her dancing, her social media presence, and in general is just very confident. She has been friends with Jake since they were kids (as have their respective actors!). She is often sarcastic, and quick to call out anyone and everyone. She is also very fiercely loyal to Captain Holt. Gina is played by Chelsea Peretti.

The very serious Captain himself. He has always wanted to be a Captain, has been in the police force for a very long time, is very talented, but was never given a shot to be in a leader position. This all changes when he is given command over the 99th precinct. He is openly gay, married to Kevin (another wonderful character), and loves all things classical. His strict style clashes with Jake more than once, but they have a reluctant father-son relationship going which is nice. He is played by the amazing Andre Braugher.

I put detectives in quote marks for a reason. These two have been in the force for ever, and will probably never leave. They are primarily known for not being helpful, sitting at their desk, and doing nothing. They have on occasion helped out the team though!

That’s it for Brooklyn Nine-Nine! Also, a close contender for B is Buffy the Vampire Slayer. Although, because of the title…I may be able to come back to it down the line…

Anyway, B is all done and dusted, let me know if you’ve watched the show before and who your favourite characters are! Or if you haven’t seen it, I hope I’ve piqued your interest and you might consider checking it out 🙂

The next entry, C, will be coming out next Tuesday.

Angela Hi! I'm Angela. I'm 29, based down in New Zealand, and happily married to a wonderful guy. We have a beautiful little one year old girl whom I often talk about. Welcome to my blog where I blog a little about anything and everything.
Published April 21, 2017April 21, 2017