So hey! You guys may know about that one tattoo I have cause I talk about it a lot.

Here’s a more recent picture of it: 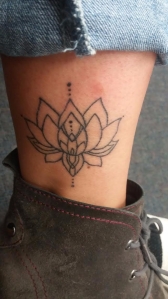 It’s no longer bumpy, in fact I can’t even feel it when I put my hand on in. It’s fully healed! Which brings me to my next point. I now want that full mandala tattoo I was originally planning.

I emailed back Angie, and told her I was keen to return. I saw a recent drawing she had done on Instagram, of a floral mandala:

I don’t really want the rose, as I’m not too keen on roses, but I loved all the delicate leaf details, and the twist from a stand-alone mandala! So I went in last Tuesday after work for a consultation. Angie says she loves to come up with custom drawings, so she would work on an original mandala pattern for me. I promised to email through the styles I liked. She also talked about putting the mandala in the middle part of my upper arm, and having the leaves coming out above and under, but curving with my arm, so it would look like it was moving as I moved. I couldn’t really picture that but it sounds cool! So now I’m really excited. The appointment date is set for Sat 1st July. The reason it’s quite far is because we had to book in 4 hours (cause this is a larger tattoo) so also it’s going to cost a lot more, and I gotta save up specifically for it. I don’t think it’ll really take 4 hours, but more time is better just in case. My lotus was meant to take 2 hours, but really it was only around 30 minutes, so I’m feeling good.

Anyway! This all led me back down the Pinterest hole of looking at tattoos, both mandalas and everything else. So from here on out, let’s look at more tattoos and possible future tattoo ideas for me (or you guys)! So yeah, this is only a small portion of the tattoos I was looking through on Pinterest, as well as Google Images. There’s so much out there, and they look so amazing!

I do get excited about tattoos, but I do also exercise a lot of restraint, as they cost money, and I want to be sure that I want that image permanently inked on my skin. I mean, there is laser removal, but I wouldn’t go through with a tattoo unless I was 100% on it. I’m so excited for July now, to see what Angie comes up with 😀

However, I am also already considering a third tattoo, so I may have a problem. I like the look of those delicate ones, or maybe a music related one, as it is another passion of mine 😀

Any tattoos you guys liked the look of in particular?