As the title says, I did the Tongariro Alpine Crossing back in February. My partner, Rory, had done this before a fair few years ago, but I never have. As a native New Zealander, and a kind of fan of Lord of the Rings, it has been on my to-do list for a while. Now I’m not in the best shape, but this hike didn’t seem too daunting. At least not as bad as the Salkantay Trek up to Machu Picchu I did a few years back. So, a deal came up on TreatMe, we took it and went over Waitangi Weekend (February 6, a public holiday in NZ)

If anyone is interested, here’s a link to a map of the day hike: Tongariro Crossing

We stayed at a lodge in Owhango, and got dropped off at around 7am at the Mangatepopo carpark. Already at the beginning, there was a lot of people. This is a very popular day hike (one of the most popular), especially on a weekend in summer. The guide who dropped us off said there was likely 1200 people hiking on this day. This led to very long lines for the toilet, as they are far and few between on this hike. So after a not-so-quick rest stop, we set off at around 7.20am. This hike is said to take around 5 1/2 to 6 hours if you’re just doing the main walk, so we were looking at finishing at around 1-1.30pm.

The coolest part about this hike is the scenery. It changes so much as you go through it. From Mangatepopo carpark, we were walking through grass and hills, and then you start following this walkway through wetlands. I will also say, it was very hot at this point, so Rory and I ditched the thermals. (Another note about this hike, everyone and all the sites warn you that there are drastic changes in weather, and they were not kidding.) I really enjoyed this beginning part of the hike, it’s easy and relaxing and was a nice stroll. This first part of the trek took us about an hour.

Soda Springs is a 5-minute detour from the main path. It’s worth going to take a look, and having a bit of a meander. There is also a toilet near this area, the last one until Ketetahi Hut. So I would suggest using it, as it’s a long way to go till the next one (I didn’t, so it made the hike slightly less enjoyable that last hour before Ketetahi). From here, it gets a lot tougher, and a lot colder. All the thermals and jackets came back on. There’s a lot of steep uphill climbs, but once you’re at the top, you get to look back down and see all the people down below. 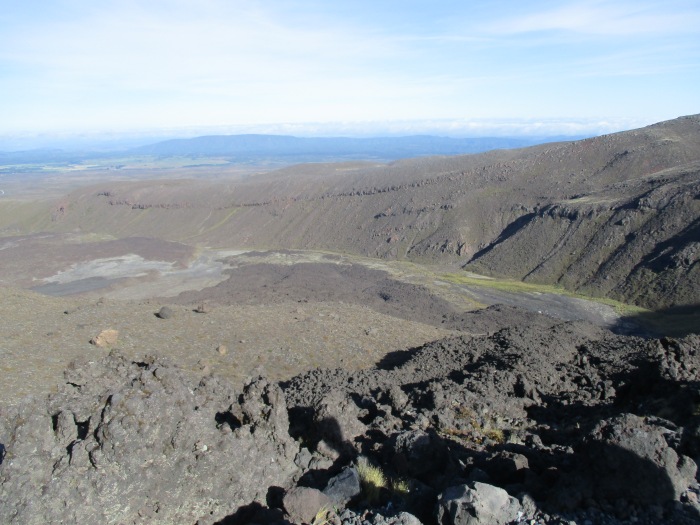 Then there’s a lot of flat ground as you walk along the valley. There’s an area to the side where people have been using rocks to write messages which is neat to have a stop at. Two guys went down and began writing their own message, it started with “Send”. I asked Rory what he thought they were writing, he suggested “Send Nudes”, we could kinda see a N starting to take form, so we agreed it was that. Stay classy, random dudes.

The next bit to tackle was the aptly named “Devil’s Staircase”. I stopped many times during this part. I often wheezed out Rory’s name to get his attention that I needed to rest for a bit. This was definitely the most challenging part of the hike, but just keep trucking on, and drink lots of water.

At the top, you get a really nice view of Mt Ngauruhoe a.k.a Mt Doom. I also recently found out that it’s still an active volcano. If you want to (and are fit enough), you can climb the summit, which takes an extra 3 hours to get up and down. We passed on that.

There’s still more uphill, but once you finish that, you reach Red Crater. From there you also get a view of the Emerald Lakes, which is what I was most keen to see.

The way down to the lakes was the funnest part. The ground isn’t at all stable here, so there’s lots of loose stones and dirt. I took it slow and steady at first, but Rory zoomed down by digging his feet in and ‘slid’ down in a weird skiing motion. I followed suit, and we passed a lot of people this way and reached the lakes in no time! 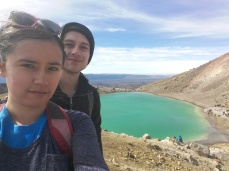 From Soda Springs to here, it took us around two hours. We stopped here for a bit to have some snacks and just enjoy the scenery. Then we made our way over to the Blue Lake and had another break.

From here to the Ketetahi Hut, I didn’t take as many photos, I got caught up in looking around and just enjoying myself. Once you see the hut, it takes a lot longer to get down to it than I thought it would, as you have to zigzag down the walkway, as the ground isn’t stable. This part took under an hour. We stopped at the hut and sat in the shade to have some lunch.

The final section of the walk is from the hut to the carpark where you get picked up. It got really hot at this part again, and we walked past many people who were starting the walk from the Ketetahi side. We were told that the last part is often referred to as “the endless jungle”, and lots of people preferred to jog or run in this area. It really did feel endless, it didn’t seem like any of the previous parts of the hike. It was spectacular. Course, by this point I was starting to feel my legs getting exhausted, so I became focused on reaching the end. Then, suddenly, the jungle turned into a carpark, and we had made it! This last part took us an hour.

All in all, the hike took us around 5 and a half hours. We spent the rest of the afternoon back at the lodge relaxing and lounging. I would definitely recommend doing this hike. I would want to do it again myself, now that I know what I’m getting into. My legs were definitely stiff for a few days after though.

Angela Hi! I'm Angela. I'm 29, based down in New Zealand, and happily married to a wonderful guy. We have a beautiful little one year old girl whom I often talk about. Welcome to my blog where I blog a little about anything and everything.
Published July 17, 2017July 16, 2017