*This was originally posted on May 11. I’ve added some new pictures as well*

My first idea for my dress was to buy one online. I was planning on buying my dress at JJ’s House. The one I was eyeing up was this one, which you can see from all angles here. There were a few others I liked, but I just really liked the look of this one, and there were lots of positive reviews from this site. Jo and Kruti got their bridesmaids dresses from JJ’s House in the end.

However, for fun and giggles, I thought it would still be fun to go into a bridal boutique and try on some dresses. My sister was coming down to town that weekend (May 14), so I thought it would be fun for her and me to try on dresses and to bring along mum. Sounded like a lot of fun in general. So I contacted Sally Eagle and made an appointment to come in.

The below images are not mine, but from the official Sally Eagle site on Google Maps. But it shows just how beautiful and open the boutique is.

END_OF_DOCUMENT_TOKEN_TO_BE_REPLACED 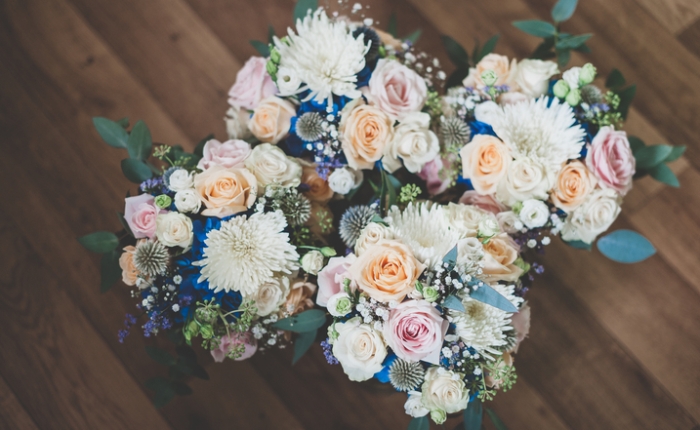 I talked a little about this in my latest Pinspiration video about weddings. I wanted to share with you guys a little more about my wedding flowers. It was one of the parts that I really loved planning. From looking at Pinterest for inspiration, then talking to my florist, to the final result, it was all fun! I did tinker with the idea of DIY at the beginning, but I know myself too well. I would not have the energy for it, or the patience. I would rather work with someone who knows what to do.

First off, when I first investigated what kind of wedding flowers there were. Things got insane. There’s almost too much information out there. To all the kinds of wedding floral arrangements, what flowers are in season, colour of flowers, types of bouquets and arrangements, I was confused.  So I stuck with the basics first, a bouquet. I looked at all the different types of bouquets (there’s a lot), and decided on a posy. They’re the smallest types, and what with me being small too, it just made sense.

I found a few pictures that fit with the blue/peach/rose colour scheme I liked. Then I emailed a few wedding florists around town, asking for general costs and sharing my current idea.

I ended up going with Emma, from Em’s Flowers. This was in June. She’s a new, smaller vendor who does this just as a side hobby. But she is already well known and came recommended by both Sweet Bakery and Cakery (who did my cake), and Sally Eagle (who made my dress). We met up at a cafe and got to talking. We got along straight away. She knew her flowers (always a good sign) and talked to me about which flowers would be in season for the time of the wedding, what could go well together, how her costs worked, and so on. She was also happy to make mocks along the way, so I could get a look and feel of how the floral arrangement would be.

As we met on and off during the eight months (I booked people earlier than I needed to), we finalised the floral arrangements. There were a few scrapped ideas along the way. Boutonnieres for the guys. Flower crown for me. More floral arrangements. These were mostly due to me finally realizing that the floral budget was getting more extravagant than it needed to be. Even with Em’s reasonable prices. The flowers we agreed on in the end was for bouquets, one for me, and three for the two bridesmaids and groomswoman. A floral arrangement for the ceremony, on top of the fireplace mantelpiece. Small loose flowers in jars for the centrepieces. That was that. 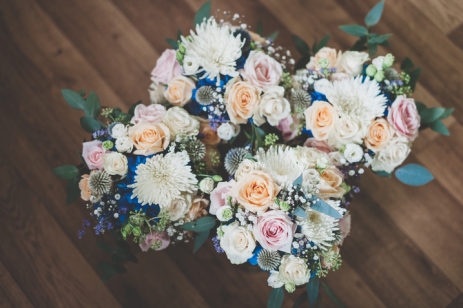 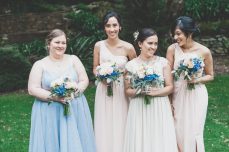 So these were the final bouquets. We all had the same style, with mine being slightly more full. I’m so happy with them! The flowers were a mix of peach avalanche, sweet avalanche and solsy roses, blue hydrangea, lisianthus, hypericum berries, sea holly, chrysanthemum and greenery. Tied together with lace ribbon from my dress.

Our little centrepiece flowers. We didn’t fuss too much on decorating the reception tables. Pinterest led me down a rabbit hole, and in the end, we realized that it didn’t matter too much in the end. Just a few jars of flowers, a table runner, some tealights (that we forgot to light till the last minute), and we were happy.

For the head table, we brought out the A & R block letters I bought on a whim. We also reused our bouquets, since we figured we don’t need them during the reception, we had them placed in jars and decorated our head table with that. Originally I was thinking of getting a separate floral arrangement, but Em suggested this, as it saves money (which she knew I wanted to stick to a budget as much as possible).

This collage I took off Em’s Instagram page. Funnily enough, the wall hanging and floral arrangement for the fireplace took me the longest time to be happy with. Throughout the planning, this was the part that I kept umming and ahhing about. On the day itself, I literally didn’t even see it until after the ceremony. I only had eyes for my future hubby, that I didn’t even realize how everything looked till I was munching on some nibbles after the ceremony, talking with friends.

Now of course, is the question of what to do with the flowers after all the wedding. Some of the girls kept their bouquets. I asked Em for help with drying mine. She took out the flowers that wouldn’t dry, and made them into a smaller arrangement. We hung them upside down for a few weeks, and now I have a small memento from the wedding. The rest, my mum kept (even though I told her she didn’t need to), she dried the ones that would dry, and now has them in a neat arrangement in a basket. I personally would have probably chucked them all, as I said before, DIY, not my forte.

That’s the long tale about my wedding flowers. I am trying to keep these short, but I’m having too much fun writing and reliving all the wedding adventures. So I hope this was entertaining to read, it was very entertaining to write!

How did you guys go about with the flowers if you got married? Or if you’re not married, what kind of flowers do you guys think you’d go for?