I’m back with another DIY post! This one has been on my radar for a while. I first saw this post on Pinterest a while back. It was to make a Marimo moss ball aquarium. What really grabbed me was the fact that they were in lightbulbs! 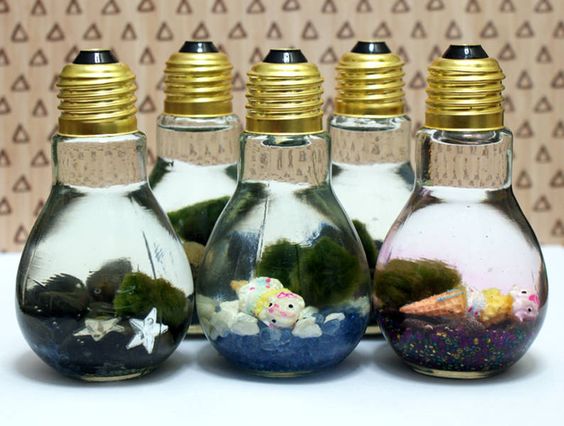 On further investigation, I realized that the creator had found lightbulb shaped jars to use. I couldn’t find any, so I bought some clear bulbs instead. I then found out that New Zealand won’t allow in marimo moss things, because our eco system is pretty delicate. Customs is very strict on any fruits, veges, or plants, so I had to rethink. I decided on making a lightbulb aquarium with fake plants instead.

Removing all the lightbulb components was fairly tricky, but I did it in the end. I did break one lightbulb because I got impatient and tried to shake the last wire out and it cracked it. So be patient, and look up how to do it online. It’s doable.

Here’s what I used to make my Lightbulb Aquariums.

I funnelled in some blue sand. I stopped when I figured it covered the base pretty well. Then I just cut up the fake plants and used tweezers to drop them in.

When I was happy with what I had inside, I slowly added some water.

Ta-da! I really like how these came out. The water makes the plants look a bit more magnified, and since it’s all in a lightbulb, it just looks cool. Aesthetic, that’s all I want lol.

Getting them to stand on their own is tricky, as it’s rounded on the bottom. I used some blu tac to get them to stay up, but I’ll think of a more permanent solution down the line.

All in all, I really love how this little DIY project wound up. Not bad for an afternoon of messing around with random objects! I ended up making two, and I still have leftover plants to make a third one down the line.

Have you done a DIY with lightbulbs before?