Hey! Halloween is a week away and I’m getting into the Halloween spirit by baking something ‘spooky’. It’s not that spooky, but I was flicking through Pinterest, and came across this pin.

It seemed perfect, and totally within my baking skills, so I gave it a shot. I used my faithful chocolate chip cookie recipe, and made a batch of those. 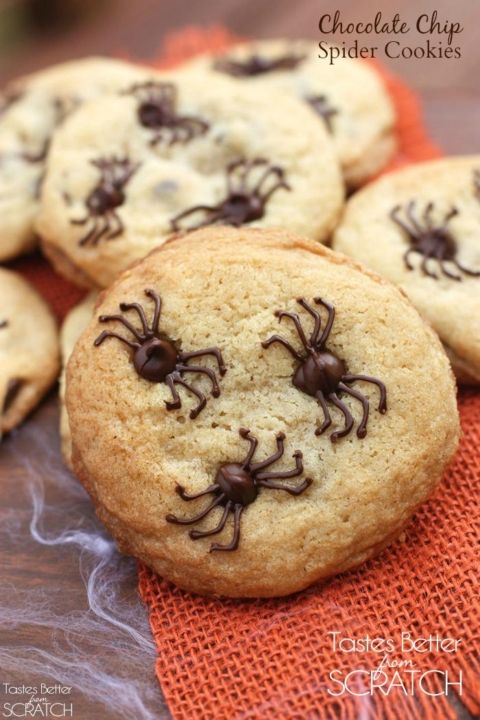 Once they had cooled, I melted the remainder of our chocolate chips, threw it into a ziploc bag and piped to my best ability. I’m pretty happy with how they came out! I admired them and took lots of pictures! I remembered that Rory had some spider decor, so I grabbed them for props. Seemed appropriately spooky.

Extra fun fact, can these really be counted as spiders since I gave them only six legs instead of eight?

What spooky treats do you guys plan on making?

I blame all my American and European blogging friends for this, you guys with all your talk of fall..and apples…and cinnamon.

I really wanted to make muffins with those two ingredients, and I found this promising recipe from Robyn at Add a Pinch, which is incredible and amazing! Go have a looksie.

Okay, let’s get into it!

You need a few bowls for this. First, sift together flour, baking powder, salt and cinnamon in a bowl.

In another bowl, throw the diced apples and 2tsp of flour together to coat them.

In one more bowl, cream together the butter and sugar. Make sure the butter is really soft, cause this part got annoying for me as it took ages to cream. Add in the egg, one at a time. Then mix in the vanilla.

Fold in the flour mixture into your cream bowl, alternating it with the milk. Mix it a little, until it’s just combined.

Get your tins and spray them, so the muffins don’t stick. Scoop the batter in. You want them to be almost full but not really. Bake them for around 25 minutes at 180 C. Keep a close eye on them, you want the toothpick to come out clean.

For the topping, melt the butter in one bowl. In another bowl mix together the sugar and cinnamon.

Once the muffins have mostly cooled, dip the tops in the butter, then the topping. This part was a lot of fun.

Now you got some muffins! They are so good!! I ate a few (as did Rory), and the next day we ate some more for breakfast.

**Hey guys! I’m reposting this in celebration of National Pancake Day, which is probably not celebrated in New Zealand, but it sounds amazing and I’m gonna go have some pancakes now!**

I have a habit of baking pancakes every Sunday now though. So I thought I’d share my recipe I use with you! It’s written in my notebook, and I don’t remember where it originally came from. It’s foolproof though!

Let’s make sure you have all the ingredients!

In a large bowl, sift together the flour, baking powder, salt and sugar.

Make a well in the centre.

Pour in the milk.

Throw in the egg.

Pour in the oil.

Mix it all together until it’s all smooth.

Now you can add the extra optional stuff. So for this one, let’s mash a banana.

Throw it in with the rest.

Let’s mix it all up again.

Now the batter is ready, time to set up the pan. Make sure to add some oil so it doesn’t get sticky.

I use around 1/2 cup of batter for each pancake.

Now it’s pretty self explanatory. Pour it onto the pan. I like to move the pan around so the pancake gets bigger.

The general rule of thumb of when to flip is it to look and see if there’s lots of bubbles. That’s what I do anyway.

Now flip it over nicely. Or try to anyway.

But hey if your rip it, just shove it back together and keep cooking it.

I forgot to take photos of the rest. But this recipe normally makes around six pancakes.

Now add whatever toppings you want. We only have syrup, so I added lots.

That’s all for this Let’s Bake! Be sure to check out the other ones for more food pictures 😛

It’s been too long!! I haven’t baked anything in ages, not since this whole moving business, so it was really fun to bake something again! Let’s bake a carrot cake!

So I’ve mentioned this recipe before in Share A Favourite Recipe!, but it’s amazing, and my go-to recipe for carrot cake. It’s very small though, a dessert designed for just two people. But you can easily double or triple it. I will be using the original recipe in this post.

First things first, you need to grate the carrot. You only really need half of a carrot to fill 1/4 cup. I ate the rest of my carrot 🙂

In a medium bowl, beat together the oil and sugar.

Add the egg, cinnamon, and vanilla. Beat together again.

Beat in the carrot. You want to just break it up a bit into the batter.

Sprinkle in the flour and baking powder.

Mix them together a little. Try not to overmix though!

Now add the mixture into the prepared tin. I’ve gone with a square loaf tin.

Place it in the oven at 180 degrees. Bake it for 20-24 minutes. Until the toothpick comes out with little moist crumbs clinging to it. That’s the ideal stage anyway.

Let the cake cool completely. While you do that, you can start working on the frosting. For the frosting, make sure everything is at room temperature or there will be lumps.

So, add in the cream cheese, butter, powdered sugar, vanilla essence and beat it together till light and fluffy.

By now the cake should be completely cool. So you’ll want to tip it out so you can add the frosting.

Just spread it on. I always love this part. It’s relaxing.

Now you can garnish the top with walnuts. I’m not the greatest fan of walnuts, but they do look good on top of carrot cakes.

Now the cake is all done! As always I like to take lots of photos of it. You can eat it immediately, but according to the original post, it tastes best when left in the fridge for at least a day. I can never wait that long though!

Look, a new baking post! This weekend, I wanted to do something new with the leftover coconut I had, and I came across this recipe. I’d never made macaroons, and the recipe looked simple enough. This makes 24 cookies.

Also, if you are looking for healthy food options, this is in no way, shape or form anything related to that.

So, let’s get started!

In a large bowl, add the flour, coconut and salt.

Mix together. Also, there is so much coconut. It’s insane. You could probably half the recipe actually. But too late for me!

Pour in the condensed milk and vanilla essence.

After a while though, the spoon was getting stuck. So you need to stick your hands in and get messy.

Now you have to scoop out the cookies onto the tray. It’s super sticky, so I used two spoons, to roll them into little balls and place them on the trays.

Now, you put them in the oven at 180 degrees. Bake them for 12-15 minutes or until the coconut is toasted.

Coconut goodness. I’m not kidding with how coconutty they are. If you’re not into coconuts you may not like this. If you do, then great!

This time, I tried Banana Crumble Muffins. You guys know I’m a fan of crumble on top of muffins, it just puts it over the top and so much more scrumptious! You can find the recipe here. This recipe was enough for 12 muffins.

First make sure you have everything you need.

For the crumb topping:

END_OF_DOCUMENT_TOKEN_TO_BE_REPLACED

While going through Anni’s blog for my Have You Met series, I came across all her delicious looking cupcakes. So I decided to try her Lemonade Cupcake recipe. Be sure to check out her post as she is the one who originally shared it 😀

Also, I can’t wrap my head around mls and grams, as I go by cups, so I’ve done some conversions.

As always, first make sure you have what you need.

END_OF_DOCUMENT_TOKEN_TO_BE_REPLACED

I’m back with another baking post! The possibilities are endless when it comes to baking.

For my first muffin edition, I wanted to do blueberries. You can find the original recipe here! I’ve stuck with the original recipe quantities, as it makes 12 muffins which is what I wanted. This was originally going to be a lemon and blueberry muffin but I still don’t have lemon zest so I just scrapped it. I shifted the recipe around a little as I took in comments from previous people who had tried the recipe before. Anyway, let’s get into it.

Make sure you have everything you need:

In a medium bowl, pour in all the dry ingredients (flour, sugar, baking powder, blueberries, and salt).

Then mix them all together.

In a bigger bowl, pour in the wet ingredients (milk, oil and egg).

And mix it all up.

Mix it a little. Not too much though, the batter is meant to be lumpy apparently.

Now get the muffin trays that you just bought that morning cause you remembered you didn’t have any. Grease them a little, and throw in the muffin/cupcake liners.  Once that’s all set up, pour the batter in each, filling it around 2/3 of the way.

This next bit is totally optional, but I love adding cinnamon and sugar on top to make a crust or “crumble” as I like to call it. Get a bowl and pour in a teaspoon of cinnamon and brown sugar (or more if you want, depends how much crumble you want). Mix it together.

Then just use your fingers to grab some and sprinkle it over each muffin. I wish I did more looking back, I will next time.

Now they’re ready to be put in the oven. I baked them for 20 minutes at 175 degrees. Basically use the toothpick test. If it comes out clean, then they’re ready.

I impatiently waited for them to cool, took the obligatory photos which I always do. Then immediately ate two while Rory ate one. When he realised I had already demolished twice as much as him, he ate an extra one too. They were delicious, and even better when warm!

I’m keeping this recipe as a go-to muffin recipe, it was so easy and they came out great! I’ve missed baking, even though it hasn’t even been that long since I last baked. There’s something tranquil about baking, and also, you get to eat something you made from scratch which is always a bonus!

Anyway, you can find the original recipe here. I have halved it as per usual, as well as made some substitutions, as I didn’t check I had everything before making it. I used lemon juice, instead of extract. The lemon taste was very faint because of that, so I would suggest using extract or zest if you want a more lemony taste. I also never have corn syrup, but my maple syrup was out too, so I just used honey.